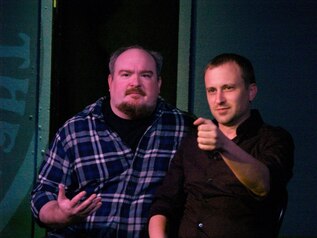 ​
​Begun in early 2006, FUN GRIP is a comedy duo consisting of Jeff Swearingen and Brad McEntire. This Texas-based long-form partnership performs with the energy and presence of an improvisational army– an army filled with acrobats, philosophers, lion tamers, dancing robots, lunatics and maybe even a rock band. Their show starts with a single audience suggestion and from that tiny seed they grow a mighty improvisational oak, branching out with extraordinary characters, extraordinary narratives, and usually at least one impersonation of a live animal (or mythological creature of yore).